Gas-side corrosion occurs during shutdown.  It is highest in the cold-end tube sections because of the presence of acidic deposits.  Cold-end corrosion is particularly active in cycling units because the deposits are initially hygroscopic, air condenses on the tubes and forms acids that greatly accelerate the corrosion process.  If the Power Station is located in a dry climate there ill be lower risk than in some other locations; corrosion is very dependent on the ambient humidity (Figure 1). 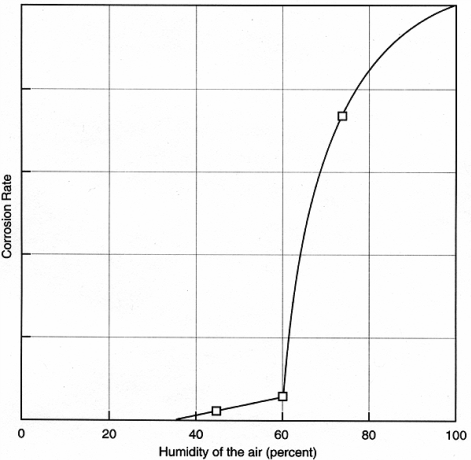 Adding a stack damper will reduce the amount of humidity reaching the interior of the unit.  The damper will also reduce cyclic stress from thermal expansions and to reduce start times after a short shutdown because it greatly reduces cooldown rates.  The following points should be considered:

Another option to minimize heat loss is to seal the turbine end of the system. If there is no internal system already installed then this can be done by curtaining the GT intakes.  A convection circuit will still be set up in the stack but this will still maintain higher temperatures for longer periods than without this curtaining.

If a stack damper is in place then gas path corrosion can be further reduced by installing an industrial dehumidifier.  The unit should include built-in heater and air filters and have sufficient capacity to exchange five gas path volumes within one day.  Unit should allow turndown to lower output to operate in a keep-dry mode.  The direction of flow is not particularly important although a common approach is to inject dry air into the cold end (one plant has duct going into modified access door) and circulate in counter flow to exit at transition duct.  A hygrometer should be installed to monitor circulating air discharge humidity.

The key to successful dry layup is to assure that nearly all moisture is removed from the HRSG upon shutdown.  This is done by draining and venting the unit while still sufficiently hot, typically with drum pressure of at least 25 psi.  The remaining moisture is removed by recirculating air that is dried using an industrial dehumidifier or by placing desiccants at accessible locations (steam drums, condenser hot well) in the boiler loop.

Besides a longer time to restart, other disadvantages include: