Grade 91 steel is superior to many other industry used materials for its increased resistance to many properties, including creep. These are dependent on the formation of a specific martensitic lath microstructure developed through correctly performed heat treatments. This structure is easily altered during installation, maintenance, and routine operation. The degradation of this microstructure to equiaxed grains with an increased mean diameter can lead to significantly reduced property strengths and so to an unexpected failure [1]. Current damage assessment methods over-estimate the expected lifetime of components made of this material as they do not take into account the microstructural changes, and so property changes, over time.

Surface replication is the widely used technique for assessing the level of creep damage; it is able to detect defects much earlier than others. It is often performed on areas thought to be most damaged or at risk; in particular welds as they are in locations of particular stress concentration and often failure. The method is briefly described here [2]:

This process then allows the structure of the material to be analysed off site, classified and future action to be taken is decided. 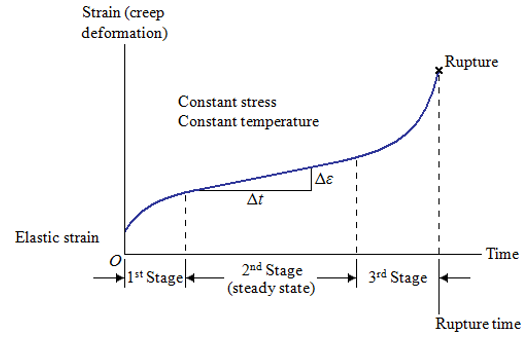 The formation of small cavities on grain boundaries in the microstructure which can evolve to larger sizes, coalesce and form cracks is creep failure. The current creep classification model for materials, the Neubauer model, shows three main stages: primary, secondary and teritary, as shown in figure 1. This model is used to assess the state of damage in the component using replica mtallography. The primary stage is defined by the continually decreasing creep rate until it becomes constant in the secondary stage- also known as the steady state. Tertiary the strain rate increases rapidly before an eventual rupture.

The stage the material was measured to be at then determined the future action to be taken. Materials deemed to be in the secondary stage required just observation, approaching the tertiary stage would either require inspections to be fixed or for a small repair, while in the tertiary stage options include limited service until repair or immediate repair. [4]

Figure 1 shows the stages and development of the creep rupture mechanism in grade 91 steel. Many studies of the creep properties have been conducted with conclusions that both creep strain and creep time of tertiary creep stage far exceeds that of secondary. This is vastly different to the Neubauer model as the secondary ‘steady state’ phase is almost irrelevant when compared to the tertiary stage- it is in this stage that the main damage and rapid growth of voids/cracks occurs in grade 91. This significantly reduces the time available for defects to be detected, and even when they are, harder to predict the estimated lifetime remaining (as it is no longer in the region of constant creep rate as modelled by Neubauer and so no longer is simple extrapolation of data points viable). [5]

Part of the difficulty in identifying defects in early stages of creep is that many of the voids in the microstructure appear to be sub-surface and so not picked up using surface replica techniques. It is for this reason that some reports state strain gauge testing must be used instead of metallography to provide an earlier warning of creep damage [6], and research is being conductued on producing an industry wide deployable sensor using the electromagnetic spectrum to detect internal changes in microstructure. [7]

To continue the use of metallography techniques, many papers claim to have equations which can successfully predict the lifetime remaining of a component of grade 91 steel, however as of yet there seems to be no consensus among them. Many put forward extrapolation equations with specific calculated parameters to account for the non-steady creep rate; providing certain stable conditions such as a maximum temperature to ensure no phase changes occur [8-12]. In particular, a method of using calculated C* values to predit the creep crack growth has been found to correlate well against experimental data of P91 [13].