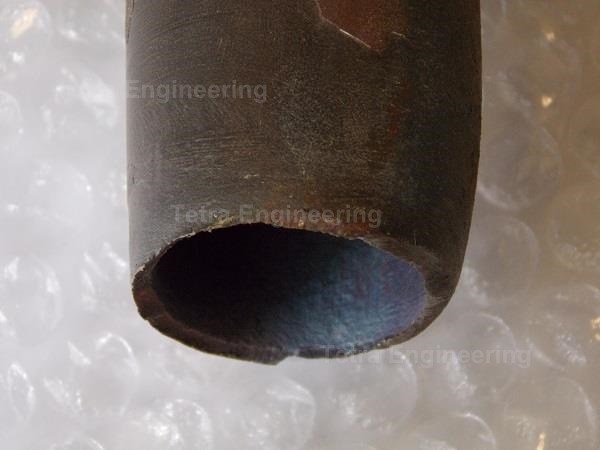 During the startup of the triple-pressure HRSGs, plant staff noticed steam coming from the stack and a discrepancy between feedwater and steam flows.  On shutting down the unit a T23 superheater tube was found with a complete circumferential failure.  The failed tube was removed and the bore was plugged with some difficulty due to poor access and the uncommon material.

Tetra Engineering performed a metallurgical analysis of the failed tube finding that the failure was due to pure mechanical overload (see shear lips on the fracture surface).  It was suspected that liquid water would have entered the tube while it was still warm.  The difference in average temperature of the failed tube compared with adjacent tubes would have led large thermal loads in the tube.  The figure below shows how the failed tube was situated directly underneath the header outlet nozzle, upstream of the final attemporator spray.  Tetra recommended to check if the valve on the attemporator spray was passing water.  Investigation by plant staff found that it was indeed passing significantly.  An investigation is under way to determine why the water did not drain correctly.

Mechanical overload of superheater tubes is a common occurrence in combined cycle plants and requires a two-pronged approach to prevent recurrence: identifying the source of liquid water (spray water leaks, condensed steam, etc) and then understanding why the fluid did not drain correctly (pipe gradient, drain system capacity, etc).  Typically thermal loads are less likely to result in failures by relaxing once the steel has yielded.  This is one example of a failure type where the loads can exceed the tensile strength of the material.  Note that leaking of spray water into the steam pipe during operation can cause thermal shock of the pipe steel, leading to cracking and failure. Non-destructive examination (NDE) methods can help detect defects before they become problems!