The key factor in determining rate of cold-end deposits in HRSGs firing natural gas is the sulphuric acid dew point. Sulphuric acid that condenses on surfaces in the cold end of a HRSG will corrode surfaces.  On boiler tubes and tube fins this corrosion generates an oxide layer (rust) that reduces the heat transfer rate.  The rust will also flake off and deposit downstream between tube fins, increasing backpressure and restricting the flow of gas reaching the heat transfer surface, again reducing the heat transfer rate. SO2 is converted to SO3 in combustion.  The total rate of conversion is usually assumed to be from 3-7% and is a function of combustion temperature in the gas turbine, the sulphur content of the fuel, and the exhaust gas temperature. The resulting SO3 rapidly combines with the moisture in the exhaust gas to form sulphuric acid vapour.  If the temperature of the gas containing this vapour falls below the dew point then the acid will condense.  Typically this occurs on free surfaces, such as boiler tubes or boiler structures that are below the dew point temperature.  But it can also occur on particulates suspended in the gas stream.

In units running with natural gas there will be very few particulates and the sulphuric acid will deposit as a film on components that are below the dew point.  In that case the deposition rate does not reach its maximum until the component surface temperature is 20-30°C below the dew point temperature.  This is shown in Figure 1 [1].  The lower set of curves is for cases where particulates prevent super saturation of the gas.  In essence this means that while HRSGs running on clean gas have relatively small amounts of sulphuric acid per unit volume of gas, a larger fraction of that acid will condense on component surfaces that are below the dew point temperature and exposed to the gas stream. 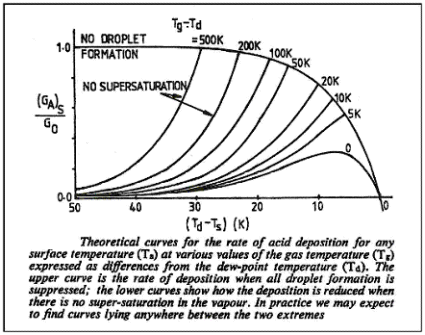 Non-pressure surfaces in the stack and surrounding structures will see deposition unless the surface temperatures rise above the dew point, although deposition in these areas is less of a problem for plant integrity.