Boiler proper piping (BP) is designed according to ASME Boiler and Pressure Vessel Code Section I. All internal tubes and piping part of the boiler, such as downcomers, risers, superheater tubes etc. belong to this jurisdiction. All internal piping has to be fabricated, tested, inspected and stamped according to the ASME BPV Section I requirements.

For external boiler piping (BEP and NBEP) running to and from the boiler, such as feedwater, main steam, vents, drains, blow off, chemical feed etc. the ASME B31.1 Power Piping Code is used for design, material selection, fabrication, installation and testing. In addition, valves are considered as part of the external piping with design requirements accordingly.

The proper design code selection for a typical boiler can be seen in Figure 1.

The limit between external boiler piping (B31.1) and any connecting process piping (B31.3) is within the Owner’s prerogative to choose. The latter piping is designed according to the ASME B31.3 Process Piping Code. The B31.1 code has a narrower scope focusing on the steam –water loop while the B31.3 code can be used for a variety of fluids. There are no vital differences between the two standards (B31.1 & B31.3) with regards to design (factor differences, slight different values for max allowable stress, use on SIF on reducers etc.) although vast differences exist with regards to materials and fabrication. 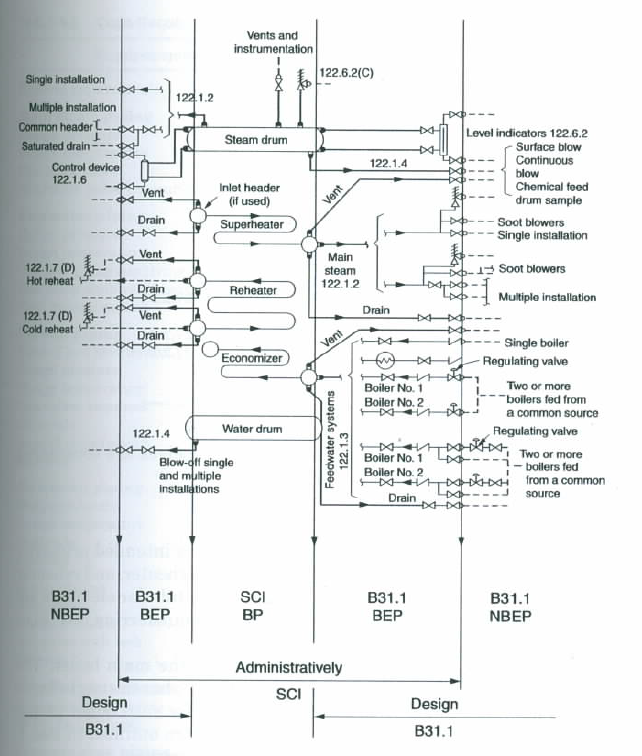