Tetra Engineering Group, Inc. (TETRA) has assisted the owners of natural gas-fired combined cycle plants with effective remedies to HRSG thermal performance and integrity issues since 1993.  Over that time, TETRA inspected hundreds of HRSGs of all types and sizes from nearly every HRSG manufacturer and performed numerous failure analyses on HRSG components. 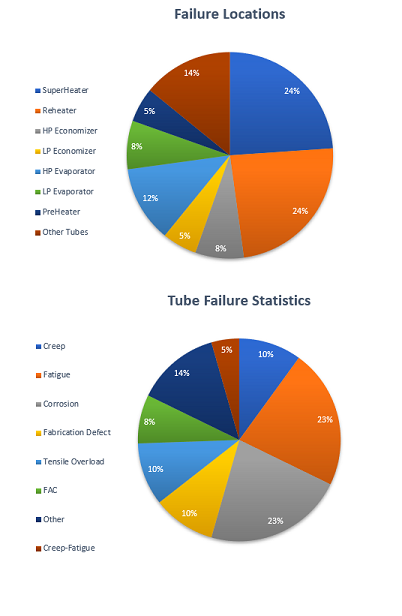 Heat Recovery Steam Generator (HRSG) tubes are the interface where useful energy from the waste heat contained in gas turbine exhaust is used to generate steam.  HRSGs have undergone substantial changes in design over the past 20 years as the technology matured, starting from small single-pressure units driven by aeroderivative gas turbines to today’s large triple-pressure units with reheat running steam pressures in the high-subcritical region [1], not to mention the various once-through designs.  Besides fundamental design differences, modern HRSGs are also subject to a wider range of duty in power applications.  Baseload operation was normal for earlier HRSGs, but today’s deregulated electric power market imposes that many new large HRSGs cycle or operate in flexible duty.

The relatively simple design and less severe operating conditions than in radiant boilers running with coal or oil create a more benign environment for the HRSG heat exchanger tubes.  Nonetheless, failures do happen, and of particular concern are tube failures, which are not uncommon.  Modern demands on HRSGs has effectively driven them to see many of the tube failures that occurred on radiant boilers, with some differences.

When TETRA published the Tube Failure Diagnostic Guide in 2004, the authors anticipated the higher pressures and temperatures that emerging HRSG designs would impose on tubes.  The result would be greater risk of high temperature damage due to creep, corrosion fatigue and damage due to stresses that result from differential thermal expansion.  TETRA’s observations over the last 15 years have largely confirmed that prediction.

Tube failures occur in all heat exchanger modules, from the cold-end economizers to the hot-end superheaters and reheaters, but the most prevalent types of damage mechanism in each area will be different.  The nature of service (base load or cycling), fuel type and water quality will also influence the frequency of occurrence for a given damage mechanism.  Mechanisms include: Creep, Fatigue, Creep-Fatigue, Underdeposit Attack, Flow-Accelerated Corrosion (FAC), Mechanical Erosion, Stress-Corrosion Cracking (SCC), Overheating and Mechanical (Tensile) Overload.

So Which Failure Modes Are Most Common?

Very few comprehensive statistics have been published on failure locations and damage mechanism in modern HRSGs.  To gain insight into frequency and types of failures, Tetra Engineering has compiled statistics from internal company projects on tube failure locations in HRSGs from 86 different sites in North/South America, Europe, Middle East and Asia.  The data covers roughly 8 years of TETRA projects and is summarized in the Figures to the right.  Although it is not an exhaustive accounting of all projects in the period, it does provide a useful indication of the frequency of occurrence of failures by HRSG location and by mechanism.  Superheater and Reheater tubes are the most prominent tube types in our assessments, accounting for close to 50% of all the failures.  That’s probably influenced by the fact that these tube failures are the biggest ‘surprises’.  With steam tubes making up nearly half of the numbers, its no wonder that creep and fatigue (separately and combined) are the two most common failure mechanisms, representing 40% of all failures. Corrosion in its various forms (such as cold-end corrosion or under-deposit attack) represent 23% of the failures.  Flow-Accelerated Corrosion was the cause of failure in only 8% of the failures investigated (although failures sometimes continue to happen after the cause and solution has been identified).

A sizeable sampling of the tube failure mechanisms and locations identified in projects performed by TETRA over recent years shows that hot-end components are the biggest problem area, with nearly half the failures investigated occurring in these tube locations.  This is consistent with the observed failure mechanisms where creep, creep-fatigue and fatigue account for close to 40% of the failures.  The occurrence of fatigue failures is most common in components subject to high thermal stresses and movements, i.e. such as the superheater and reheater tubes.  The relatively low frequency of FAC failures is somewhat surprising given the amount of attention it receives.  Unless a HRSG design is at fault, Tetra’s clients don’t often see repeat failures of FAC, because the remedies are generally well-understood.