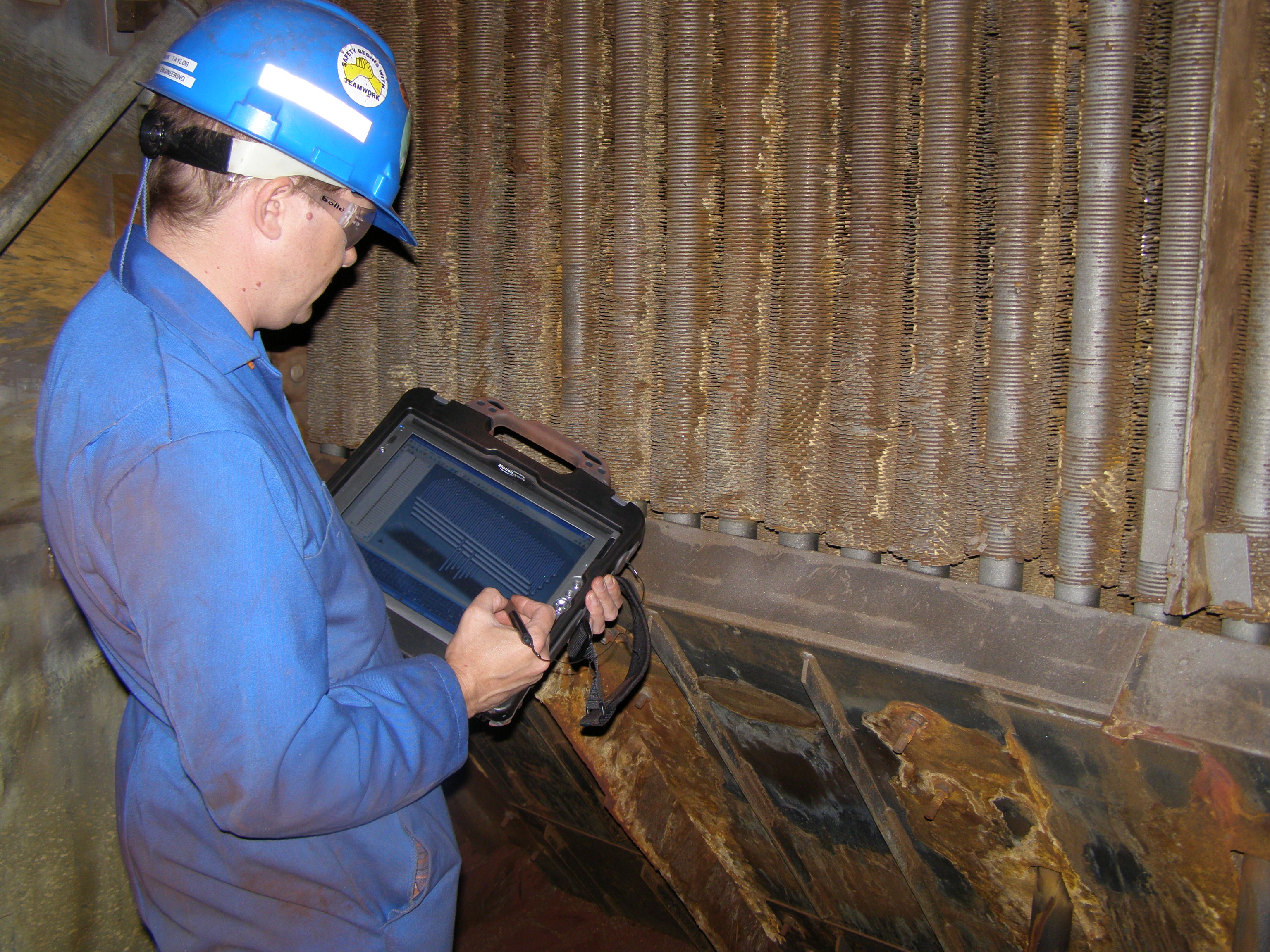 HRSG Inspections - The Key to Reliability

The high costs associated with unexpected forced outages for merchant units or for units in deregulated markets encourage efforts to anticipate problems in HRSG components that are susceptible to service related damage. Damage mechanisms vary in severity based on materials selected by the HRSG OEM, local operating stresses and the interaction between vibration and corrosion mechanisms.  In addition to fundamental design differences, modern HRSGs are also subject to a wider range of duty in power applications.  Baseload operation was normal for smaller HRSGs, but today’s deregulating electric power market requires many new large HRSGs to operate in cycling duty.  This has resulted in many units experiencing damage much sooner than would be expected with baseload operation.  Some cycled units have experienced tube failures and leaks after only a few thousand hours of operation.  The more severe duty from cycling operation reveals design weaknesses earlier at many newer combined cycle plants, as well as not infrequently fabrication-related deficiencies

At Combined Cycle Power Plants the Heat Recovery Steam Generator is an easily-overlooked, but key component, providing steam to the steam turbine and to attached process steam hosts.  While base-loaded HRSGs tend to be the most reliable - cycled or two-shifted plants suffering from accelerated damage - the importance of allocating sufficient resources to maintenance of the HRSG is often only realised in hindsight.

Even a simple visual HRSG Inspection during an outage can provide useful information about the how the HRSG is aging and what maintenance should be planned to ensure ongoing reliability.  Many have experienced the sudden drop in reliability that comes when a neglected HRSG begins having tube failures in one area, causing frequent shutdowns that later aggravate other incipient problems that could have been avoided by simple performing a Visual Inspection, and taking remedial action early on.

Tetra Engineering has been performing HRSG Inspections for over fifteen years - over 750 Inspections to date! - and provides an integrated service that supports Owners and Operators throughout the full HRSG life-cycle.  In addition to the HRSG Inspections we also perform HRSG Condition Assessments, in which we review not only the present condition of the HRSG Unit but also how historical operation has affected its integrity.

As part of its HRSG Life Management services, Tetra also draws on its unique skill set, including extensive field experience and engineering analysis, to assess the HRSG's susceptibility to certain damage mechanisms (e.g. Fatigue, Creep, FAC, Corrosion) and produced customised HRSG Inspection Plans. Those plans can be used by inspectors and NDT-teams during plant outages to target HRSG Inspections where damage is most likely to be found.

The HRSG inspection is part of the process to maintain high reliability and efficiency in the combined cycle plant operation.   As such the inspection planning process must accommodate several differing requirements:

When developing the plan one must try to answer the following questions:

The predominant technique for inspecting HRSGs is visual.  Visual inspection is performed at nearly every opportunity.  Generally, a visual exam encompasses a walkdown of the interior to view accessible components within the gas path as well as the adjoining accessible compartments.  These are located above and below the gas path on horizontal gas path (HGP) units and at the sides on vertical gas path (VGP) units.  These compartments contain interconnecting piping such as jumpers, risers, drains and vents.  The walkdown should also include drum internals and the HRSG casing with supporting structures.  The external power piping on the unit and piping supports might be added given sufficient time.  Deaerator tanks and condensers are also subject to opportunistic visual inspection and periodic nondestructive inspection as required by insurers.

The following areas should be included in the HRSG Visual Inspection scope:

Early identification of damage and degradation is the focus of inspection programs.  Some damage mechanisms can be identified by visual inspection, others only by non-destructive techniques or by removal of sections of affected components.  Because a large portion of the HRSG pressure boundary consists of finned tube, economic inspection of large amounts of surface area is difficult. Below is a list of common damage mechanisms that can affect HRSG reliability. The list is not exhaustive but covers the majority of failures seen.

The ultimate purpose of any inspection is to maintain the reliability and longevity of the equipment and systems under inspection.  To do this, inspection should help the operator determine what is damaging the HRSG, how fast is the damage occurring and where the damage is located.   With this information the operator can plan for corrective actions and repairs.  An effective inspection plan often requires input from HRSG design documentation, actual plant operating conditions, and in some cases component life prediction tools to properly prioritize inspection effort and scope.